There are no images of the first courthouse located on this spot, but the Bourbon County court required a frame building 32’ by 20’ with shingle roof and necessary furnishings. In addition, a jail would also occupy the 2 acres provided. (Bourbon County Order Book A: 27) Bourbon County , Virginia was created in 1786, so between 1786 and 1787 when the first courthouse was built, the court met at the home of James Garrard, John Kiser or James Hutchinson. In August 1787 the court met outdoors at the forks of Stoner and Houston Creeks, where the Hopewell Spring monument is located today on Second Street. (H.D. Everman, The History of Bourbon County 1785-1865, Bourbon Press, 1977, p. 8)

The second courthouse was built in 1799, seven years after Kentucky became a state, designed and constructed by John and Thomas Metcalfe. Thomas Metcalfe was the 10th governor of Kentucky, but was known as “Old Stonehammer” because of his skill as a stone mason. The second courthouse burned in 1872, reportedly at the hands of arsonists. The 3rd courthouse was quickly built in 1873, a grand French Renaissance-style building, with a clock and bell tower rising 113 feet into the sky. It had a mansard roof, and was constructed of brick with iron cornices. Its size was a disadvantage when fire broke out in 1901; ladders and water could not reach the upper floors where the fire began. Documents were however safe in fireproof vaults built to protect them.

The fourth courthouse is the one you see and was completed in 1905. It is the grandest of all Kentucky courthouses.

During the nineteenth and early twentieth centuries, Court Day, a weekly or monthly meeting of the county court, was a reason to congregate at the courthouse square, the broad street to your left as you face the courthouse. Vendors, merchants, shoppers and anyone with business at the court congregated here, once called Broadway. People came on Court Day to sell their horses, livestock, hear political speeches and to catch up on the news of the day. Things are quieter now, but it is hard to find a parking space on Monday when the court meets. 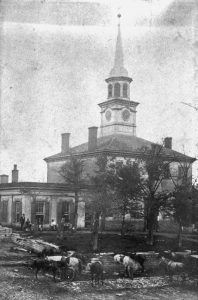 The cupola shown in this photograph replaced the original cupola in 1816. Since photography was not a common until after the Civil War, this image is fairly late in the life of the second courthouse. (Scott, p. 10)

All that was Left After the Fire

A fire in 1872, reportedly set by arsonists, left the second courthouse in ruins. Judge Richard Hawes’ office is the frame building to the left. Richard Hawes was the second governor of Confederate Kentucky. (Scott, p. 11) He moved to Paris in 1843 to practice law, went into exile in 1861 when the war began, and returned to Paris in 1866 and practiced law until his death in Paris in 1877. He is buried in the Paris Cemetery. (The Kentucky Encyclopedia, edited by John E. Kleber, Lexington: The University Press of Kentucky, 1992, p. 418.) 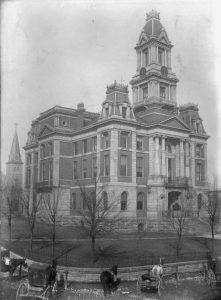 The third courthouse was designed by A.C. Nash of Cincinnati, in the French Renaissance-style at a cost of more than $125,000. It was completed in 1873, and included fire and burglarproof vaults for important court and government papers. (Scott, p. 13) 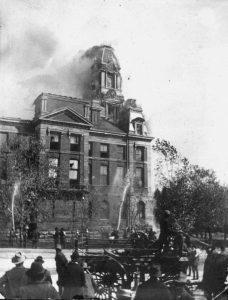 The Fire that Shocked the County

On Saturday, October 19, 1901, flames broke through a window of the courthouse. Water pressure was weak and short ladders were no match for the flames fanned by strong winds. Bystanders and courthouse employees saved historic items and moved papers into the fire vaults for protections. Consequently, Bourbon County has almost complete records of all its proceedings. (Scott, p. 14) 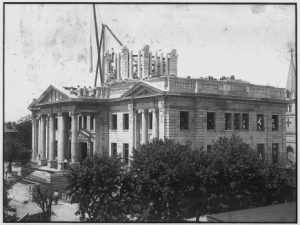 One year after the disastrous fire of 1901 Bourbon County began construction on the 4th and current courthouse. It was designed by architect Frank P. Milburn. Milburn was born in Bowling Green, Kentucky and worked all over the Southeast. Construction began in 1902 and in spite of issues with building contractors was completed by 1905. It was placed on the National Register of Historic Places in 1974.