Historical Marker #150 tells very briefly of an important fort in Kentucky history. John Martin, an early Kentucky colonizer who spent time at Fort Boonesborough and John Hinkston’s settlement (later Ruddles Fort), established a station on Stoner Creek in Bourbon County in the spring of 1779, after first building a cabin on the property in 1775/6 with the help of William Whitsett. It was located along a well-used Native American path, the Alantowamiowee Trail, an original buffalo trace. Martin who was of Irish descent, brought his family from Uniontown, Pennsylvania, down the Ohio to Limestone (Maysville). By 1779 the station provided homes for numerous families, many of them Pennsylvania German colonists.

During the American Revolution in the spring of 1780, British officer Captain Henry Byrd of the Eighth Regiment marched his British soldiers from Detroit to Central Kentucky, a trip of over 600 miles, to eliminate the frontier stations/forts and drive the settlers back east into the mountains. Along the way Indigenous Americans of many tribes (Delaware, Shawnee, Huron, Ottaway, ‘Taway, Chippeway and others) were added, bringing the number of the Native American forces to between 1000 and 1200. They captured the station, following a successful capture of nearby Ruddles Fort/Station. In addition to small arms they had brought six pieces of artillery with them, including a three pounder (or swivel) and a 6 pound cannon, the first cannon ever used against log forts in the Kentucky wilderness. One is thought to be lying at the bottom of the Licking River near Byrd’s Crossing.

Although the station contained a stockade area, the presence of the field artillery and the absence of John Martin, who was on a hunting trip, persuaded the inhabitants to surrender without a fight. The Indigenous American tribes divided the spoil and Byrd took charge of the prisoners.

Along with captives of Martin’s Fort, many of the prisoners were killed and the remaining ones were marched on foot over dense forest and through creeks and rivers to Detroit, a six weeks trip. Some of the captives were marched on to Fort Niagara, Ontario, and Montreal in Canada. Many lived in Detroit for 14 years before they were able to return to Kentucky. When they returned, some settled in the area near Martin’s Station, but others moved far away.

In 1795, a treaty signed at Greenville, Ohio, meant a general exchange of prisoners still held by the British and the different tribes took place. Wives and husbands who had been separated for years were united and Kentucky parents welcomed little children who had grown up among the different tribes.

The walled in graveyard on the site is said to be on the exact site of Martin’s Station. A marker was erected by the Jemima Johnson Chapter of the DAR in 1921. The marker is dedicated to the memory of the early Europeans who created the fort and who were captured by Captain Byrd in 1780.

Stockading Up: A Study of Pioneer Stations in the Inner Bluegrass Region of Kentucky, Archaeological Report 127, Kentucky Heritage Coucil, 1987, p. 70. Map showing the location of Martin’s fort in relation to Ruddel’s fort, and Boonesborough. 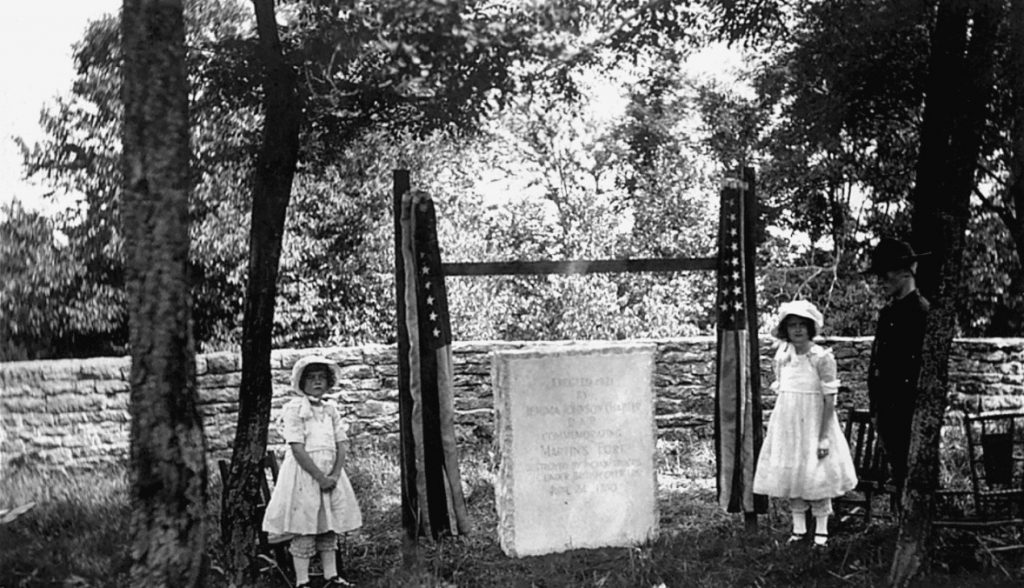 1921 dedication of marker to John Martin, in the cemetery on the location, supposedly, of the fort. [Scott’s book, Paris and Bourbon County, p. 32; “Martin’s Fort Marker”