Historical Marker #1722 in Paris gives credit to the many accomplishments of John Edwards, outlining his contribution to the founding of the state of Kentucky, and his prominence in early Bourbon County history. The Kentucky Encyclopedia adds that he was born in Stafford County, Virginia, and after 1780 and his move to Kentucky, he accumulated about 23,000 acres.

John Edwards’ Revolutionary War service is described in his petition for a pension under the Pension Act of 1832. The document is in the Cape Girardeau County, Missouri Archives Center in Jackson, Missouri. Edwards was 83 when he swore before the court that in 1775 he volunteered in Virginia and was Ensign under Captain John Fristo’s company. In 1776 he became a captain in a militia company assigned to guard the exposed frontier of Virginia until in 1779 he went to Kentucky. He served under George Rogers Clark where he was a Commissary General supplying troops and defending the frontier. His petition for a pension was recorded in Cape Girardeau Court in 1833, but the pension board denied his claim.

Information on this marker and other sources indicates that he died in Bourbon County KY. It is now clear that he left Kentucky around 1803. He was having problems paying his debts, and in his request for his pension, he refers to bankruptcy proceedings in 1804. In 1800 he deeded WestWood , his home and 400 acres, to his wife and children [Bourbon Co, KY Deed Book E : 373], and proceeded to sell as much of his property as he could to satisfy his creditors. [See the notice in the Kentucky Gazette.] He went to Missouri and lived there until his death in 1833. His will was recorded in Cape Girardeau County, Missouri in Book B, pages 110-111, 17 Sep 1832. In his will he left one-fourth of his land to one of his daughters, Jane Beall; one-fourth to his son John Jr; and the other half to “Preciller Johnson and her children.” After all debts are paid all the rest is to be divided equally between “Preciller” and her children which I have adopted as mine.” He goes on to say that at his death, all slaves he might own would be free from bondage: I “do hereby [immancipate] them fully and freely and forever and their children after them;…”

Priscilla Johnson was enslaved by John Edwards until he sold her to a friend in 1799, [Mason Co, KY Deed Book B : 425] and a few days later, the friend filed her emancipation papers in Mason Co, Kentucky [Mason Co, KY Deed Book B: 426]. In the Missouri deeds, she is described as a free woman of color. In a deed in 1817 in Missouri [Cape Girardeau Co, MO Deed Book D: 183] she authorized him as guardian for her children and to act in her defense. That same year he was appointed as her attorney in fact to transact all her business, and as guardian of her children.

In Kentucky, very little is known about his life in Missouri from 1804 until his death in 1833. His death date in Missouri was noted when his will was recorded. 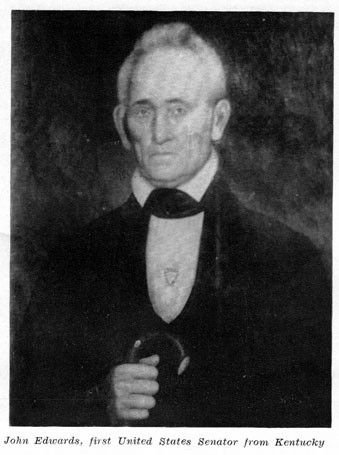 John Edwards. Photo in the public domain on the internet in various places. No credit has ever been given to the painter or when it was painted, but since John Edwards left Kentucky at the age of 52, this portrait is likely have been done when he lived in Missouri. It would be interesting to know where the portrait is, and if it is actually a likeness of John Edwards. Treasury warrant for 2000 acres in Bourbon County. The land was surveyed in1789; notice the C Men – Chain Men: John Long and Aaron Horn. The Marker was Evan Morgan. These men were the crew involved in the survey. The survey is signed by James M. Million and James Garrard, but the initials after their names are not clear. James Garrard in 1796 became the second Governor of Kentucky. The Kentucky Secretary of State’s Land Office has many documents for land ownership in Kentucky, including scanned copies of documents such as this. (www.sos.ky.gov) Notice that there are few geographical features that would help locate this land. There were many title disputes in Kentucky’s land ownership history. The official seal of the Treasury Warrant described in Image 2. These documents can be viewed and downloaded from the Land Office website: www.sos.ky.gov.

“ GREAT BARGAINS will be sold by the subscriber,….The following property will sell from this day forward, (to wit:) Valuable buildings, and the lots of ground they are on in Paris…The first a large two story frame building in which there is a large well finished store house and counting room, both large fire places of brick; the other part well calculated for a tavern, six well finished rooms plastered and four large fireplaces; another room, thirty-six feet by twenty and two fire places, … a brick lodging room and a kitchen adjoining….Those buildings were first valued by a number of workmen at eight thousand dollars;….I will now give them extremely low, and give them clear of incumbrance. …in Mason County…two valuable overshot mills in as high credit for manufacturing flour as any in the state,….Those mills in the season for grinding can make forty barrels of flour every day …the quality of the flour is superior to any that has been boated from Limestone….I have also for sale 700 acres of Military land,…with a very promising salt lick… I have also two small plantations in Bourbon that I will sell…I have patents for lands near Montgomery court house, of the first quality eight thousand acres, the half of which I will sell one third its value… I have also one thousand acres for sale …level but of inferior quality. For this I will take good horses at 6 shillings per acre, the title undoubted….I will give such excellent bargains in all, or any of the aforesaid property, that any person inclinable to purchase may be well accommodated…. Money, good Merchandise, Negroes, and Horses will be taken as installments, as will best suit the purchaser. …Any of my creditors choosing to purchase, shall have on the lowest terms, as I am determined to sell…”