Origins of the women’s club movement

The women’s club movement really gained momentum during the Progressive era (1890s-1920s) around the United States primarily as agents of social reform. During this period clubs were mostly organized by white, middle class, and Protestant women. This was during a time where women had few rights politically or legally and this was one way they could involve themselves in their community and enact change.The women involved themselves in the suffrage movement, temperance, education, literacy, and other types of reform movements. The General Federation of Women’s Clubs (GFCW) organized as the national body in 1890 with state federations joining, Kentucky included. The Kentucky Federation of Women’s Clubs (KFCW)  was established in 1894; the fourth state to do so. By 1921 there were 150 clubs with 16,000 members, including a Bourbon County chapter. Because these clubs (including the Bourbon County club) excluded Black women at all levels the National Association of Colored Women (NACW) organized in 1896 and the Kentucky Association of Colored Women’s Clubs (KACW) organized in 1903. In Paris, Fanniebelle Sutherland would eventually serve as president of the KFCW and Alice Hillman would serve as president of the KACW. Future posts will explore efforts of the KACW, Alice Hillman, and the Phyllis Wheatley Club of Paris. 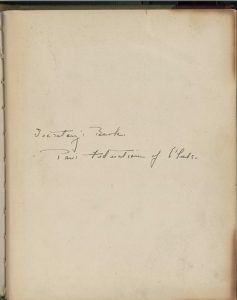 According to a meeting ledger in the Hopewell Collections, Bourbon County representatives of several clubs came together in March 1916 to organize what they called the Paris Federation of Clubs. Newspaper articles show that there was an earlier organization known as the Paris Federation of Women’s Clubs, which had been largely responsible for bringing a public library to the community and which organized in 1898. It seems that this iteration did not exist long, but by 1916 local women organized again. This time they were bringing representatives of several separate clubs together. The clubs represented were the Parliamentary Club, the Paris Literary Clubs, the Progressive Culture Club, the Health & Welfare League, the Parent Teachers Association, the School Improvement League. In these earliest years the women would most often gather in a member’s home for their meetings. Eventually, they would have their own permanent space in a downtown Paris building. This ledger covers club activities from 1916-1920.

Fanniebelle Hutchcraft Sutherland was elected temporary chairman at this first meeting and the ladies of the club were tasked with recruiting other county clubs to their federation and perfecting a permanent organization. At their second April meeting, they welcomed representatives from the Art Club, Suffrage Club, Daughters of the American Revolution, and the Richard Hawes chapter of the United Daughters of the Confederacy. It was also at this meeting that Fanniebelle Sutherland was officially elected as president of the Federation for a two-year term. To begin raising funds they agreed to collect old newspapers and magazines that could be sold to earn money. Their meetings during 1916 were mostly concerned with raising funds and growing the organization.

As was typical of women’s clubs of this era, the women who first gathered in 1916 were largely the wives and relatives of prominent men in the community. Mrs. Sutherland was a member of the well-known Hutchcraft family whose cousin, Reuben served in the state legislature at this time. Mrs. William Myall (Elizabeth) was the wife of a lawyer and banker (interestingly they were both members for the Fayette County Equal Rights Association). Dr. Martha Petree was a doctor of Osteopathic medicine who worked in the community for over 50 years. Mrs. Thomas Henry Clay, Jr. was Elizabeth Woodford Clay – her father was president of Bourbon Bank and her husband was considered one of the wealthiest young farmers in the region. The other women had similar backgrounds and pedigrees.

At the end of this first year they held a luncheon with 90 women in attendance. The newspaper reported on some of the speeches the women made at the luncheon which clarified some of their club goals, including solving illiteracy in the county by 1920, getting better streets and sidewalks, and better laws (and enforcing them). They stated that their mission was: “to stand togeth on all questions of betterment, both civic and domestic, to help form public opinion, and to pass on to the women of tomorrow the goodly heritage that was handed the women of today by the women of yesterday.”

World War I & The Tree Memorial

During the 1917 and 1918 club years the Paris club (and the entire Kentucky Federation) focused much of their attention on war efforts and there are minutes for only a couple of meetings, though the local paper shared their patriotic activities such as canning, sewing, and helping war orphans. There were minutes for only one meeting in all of 1918 and none again until April 1919.

By 1919 the club had officially changed its name to the Bourbon County Federation of Women’s Clubs and it was during that year that the club women united behind a single focus – raising funds to create a memorial for Bourbon County men who had died during WWI.

At their April 1 board meeting the club members (13 were present) decided that they should plant trees in honor of Bourbon County men in service and have a service to commemorate U.S. entrance into the war on April 7, 1917. They agreed that they should first focus on a definite number for those who gave their lives and eventually plan enough to represent all who served.

The women were clearly interested in moving quickly and set a date of April 5 (April 7 rain date) for the planting before confirming the location or type of tree! The “Place” committee determined that the green space to the left hand side of the Paris Cemetery would make the most sense and Mr. Hinton would call a special meeting of the cemetery board to consider it. The last meeting note states that a board vote was taken over the phone and the memorial service would be held on April 13.

Their next meeting was not until July 19, so we rely on newspaper reports to tell us what eventually happened with the planned memorial. An article from The Bourbon News on April 8, 1919 indicates that planting began April 5 as scheduled and that there would be 24 trees for the 24 men who had died during service (although only 22 men are named in an April 18th issue of the paper). The service, scheduled for April 13, was conducted entirely by women. Rudolph Davis was tasked with gathering every sailor or soldier from Bourbon County who served the country overseas or in army camps. They were asked to assemble at the court house at 2:15PM on April 13 in uniform. They would be led by the Liberty Drum Corps and march to the cemetery to witness the ceremony.

Fanniebelle Sutherland, then still the president of the Bourbon County Federation of Women’s Clubs, gave the speech at the memorial ceremony. It was reproduced in its entirety in the April 18 issue of The Bourbon News. She proclaims that “in planting trees we plant hope, faith, joy, youth, love.” She says that with no “selfish thought of advancement of any character, our nation went forth to battle for the preservation of liberty, democracy, and Christianity for the world.” However, the United States refused to enter the War for three years – attempting to claim neutrality until it was forced to enter due to the Zimmerman telegram that showed Germany was imploring Mexico to attack the U.S. if they did not remain neutral. Mrs. Sutherland’s speech is not merely a eulogy to those who gave their lives, but a statement for those who remain behind to carry on in their honor and remember their sacrifice. She believed that they would be “fitted to live for their country as never before” and that “future generations would marvel at their greatness when hearing the stories…” Unfortunately, the Great Depression and WWII would consume people’s lives within the next two decades – making WWI a distant and difficult memory for these future generations to engage with.

However, the trees which Mrs. Sutherland and her club women planted still stand today (or at least many of them still do) as a memorial to these Bourbon County soldiers who gave their lives. They can be found as you enter the Paris Cemetery from Main Street and go to the left. It seems as though the club women did not get the individual name plates for the trees that they planned for, but there is a ground level plaque near the grove that lists each man’s name so this may have been their compromise due to cost and time.